Nigeria’s case statistics as at close of day May 6 stood at 3,145 cases with 532 recoveries and 103 deaths. The latest figure indicates 195 new cases with the top three tallies from Lagos, Kano and Zamfara with 82, 30 and 19 cases respectively.

Meanwhile in the capital of Niger State, Minna; patients at a government treatment facility threatened to discharge themselves citing poor treatment. It is the second state to record such an incident in days coming on the heels of the Gombe State report.

Over in Ekiti State, the government says it will prosecute a man who sneaked into the state despite a lockdown. The violator’s dad refused him entry into the home ordering him to go to the authorities to under self-isolation.

The video of the father – son interaction went viral following which the dad was granted audience by governor Kayode Fayemi. He was subsequently named a COVID-19 ambassador by the governor.

The presidential task force on COVID-19 announced a month-long extension on flight ban during its daily briefing on Wednesday. The decision was made on behalf of the federal government under whose auspices it is acting.

Meanwhile the first batch of repatriation involving nationals took place today with an Emirates flight that returned 265 Nigerians to Abuja. The flight had to return to Dubai after take off after a woman who gave birth in board developed complications. She was taken back to Dubai and the plane changed before the trip was made.

According to Head of Nigeria’s diaspora commission Dabiri-Erewa, the Nigerian ambassador in Dubai, and staff of the embassy are in touch with the mother and child who are in good condition.

They will now all go into 14 days of mandatory, supervised isolation in government-selected hotels. This will apply to the thousands of Nigerians expected to return home in the weeks and months ahead. Flights from the UK and US are expected coming Friday and Saturday respectively.

By close of day May 5, there were 2950 confirmed cases of CIOVID-19 in Nigeria, 481 discharged and 98 deaths the NCDC reported.

The news spotlight was in Gombe on Tuesday where persons in isolation protested against poor health care. They blocked a road as part of their protests as locals stood by looking.

An official explained that they were asymptomatic despite being infected hence required lesser medical attention, he also dismissed the poor feeding claims.

Despite having been persuaded to return to the center, authorities are urging persons who might have come into contact with any of them to self-isolate. Gombe is the fourth most infected state with 98 cases only behind Lagos, Kano, FCT and Borno who occupy the top four slots in that order.

Local media reports that President Buhari has also waived import duty on all medical supplies. The blanket waiver on equipment and supplies is part of government’s “efforts to strengthen health infrastructure in response to the COVID-19 pndemic.”

Before now, importers had only been granted tax reliefs as announced by the Finance Minister who weeks back said government was liaising with stakeholders in the area.

This is the latest on a list of fiscal policies by the federal government to cushion the industry from the economic impact of the pandemic.

The easing of a federal lockdown on Lagos, capital Abuja and Ogun states. The government says the reopening of the economy will span over a six-week period.

The next two weeks will determine whether or not the process will be continued or reversed in Africa’s most populous nation and its biggest economy.

Some key guidelines issued with respect to public places include: Mandatory wearing of face masks, adherence to temperature checks, strict handwashing and use of sanitizers, observance of physical distancing and ban on public gathering.

Passenger flights remain prohibited as are interstate travel, governors last month agreed on the latter. Neighbourhood markets are to open thrice a week between 8 am and 3 pm.

Banks and financial institutions, category of government offices and corporate sector will also operate between 8 am and 2 pm. Schools, places of worship, clubs, bars and gardens are to remain closed.

Meanwhile mysterious deaths in Kano state have been linked to COVID-19 according to the Presidential task Force coordinating the pandemic response. Sani Gwarzo, national coordinator of the task force confirmed the link in an interview with journalists in Kano.

“We have five cogent reasons to say that the mass death recorded in Kano is associated with coronavirus.”

He listed a number of them as the age of the deceased persons, concentration of the people in one place and “test we have constructed which have element of COVID-19,” Sani Gwarzo, national coordinator of the Task Force told journalists in Kano.

He added that the final report would be ready in the next one week or few days, “it is necessary for people of Kano to wake up from their slumber that this is a serious issue.

“We need to know what is happening we are successful in identifying what the problems are and secondly we are happy on the level of cooperation the private sector and other stake holders. Many people have come out to support the state we cannot expand our investigation until we are certain,” he stressed.

As of April 27, when Buhari imposed imposed the total lockdown on the state, the principal reasons were to better understand a spate of “strange deaths” and containment of the rise in COVID-19 cases.

But on Saturday, Ganduje announced that there would be free movement in the state between 10am and 4pm on Mondays and Thursdays. He said all the major markets in the state would remain closed, except Ya’nkaba and Ya’nlemo markets where vegetables and fruits are sold.

It is not known whether the decision was in consultation with Abuja but the announcement has drawn the ire of social media users who are accusing the governor of being reckless and endangering the lives of people in the state and beyond.

Kano recorded one of its lowest figures by close of day May 2 with two cases out of the 220 recorded. The state remains second most impacted with 313 cases behind Lagos’ 10,68 and 266 in FCT.

The May 2 tallies stood at 2,388 confirmed cases, 385 discharged and 85 deaths. Kogi State remains the sole uninfected across the federation. Meanwhiles, plans are afoot for a strict implementation of a partial lockdown as announced by Buhari days ago.

“I have decided to put in place gradual easing of lockdown measures,” Buhari id in a much-anticipated television address. “We will implement a curfew between 8 p.m. and 6 a.m.,” President Buhari said.

“Inter-state borders will remain closed except for basic necessities (…). We will impose the wearing of masks in public places, as well as social distancing measures,” he added.

These new measures were not to apply to Kano, due to the “mysterious deaths” that are still being autopsied, and rise in cases.

May 2: Nigeria tops tallies in West Africa, 5th on continent

Nigeria with tally of 2170 is the new leader in West Africa overtaking Ghana whose cases count stands at 2074. Nigeria also the second most impacted in sub-Saharan Africa and fifth overall on the continent.

As of close of day May 1, the NCDC reported 238 new cases, one of the highest daily tallies. The bul of the cases coming from Kano State. Kano’s 92 along with Abuja’s 36 and 30 from Lagos completed the top three infected states over a 24-hour period.

Africa’s most impacted nations include:

May 1: How Nigeria recorded about 1000 cases in a week

Nigeria as of April 23 was nearing the 1,000 confirmed cases point. Africa’s most populous nation’s tally at the time stood at 981. Roll on the next seven days and the country has seen almost a 1,000 new cases.

As of April 30, 2020; the NCDC record showed 1,932 cases with 58 deaths and 319 discharged patients. The current tally indicates a 951 increase since April 23. A breakdown of the increases over the period is as follows:

Kogi State being the only unaffected state so far. Kano State has meanwhile risen to second with 219 cases behind Lagos’ 976 cases. Nigeria is currently second most impacted in West Africa only second to Ghana, where over 2,000 cases have been recorded.

President Muhammadu Buhari announced Monday evening a gradual easing of confinement measures from 4 May, but will impose a night curfew and the wearing of masks.

78 of the new cases were recorded in Lagos, 14 in FCT, 5 in Ogun, 4 in Gombe, 3 Borno whiles Akwa Ibom, Kwara and Plateau recorded two, one, one respectively. Plateau becomes the latest state to be infected. Discharged tally stands at 197 with deaths at 31.

Kano state has had a two day no-case situation after a recent surge took it to number three on the national tally. Head of the presidential Task Force on Thursday disclosed that the NCDC had been instructed to coordinate necessary support for the state.

ECOWAS leaders on Thursday held a teleconference to discuss the impact of the virus on the region. Also present in the meeting was the ECOWAS commission chair and United Nations representative for West Africa and the Sahel.

Governors have settled on a ban on inter-state movement for a period of two weeks as part of efforts to control the spread of COVID-19. They arrived at the decision after a virtual meeting of their umbrella body, the Nigeria Governors’ Forum (NGF) which held on Wednesday.

Ekiti Syaye governor and NGF Chairman, Kayode Fayemi, said the action had been necessitated by the increasing evidence of community transmission of the virus. 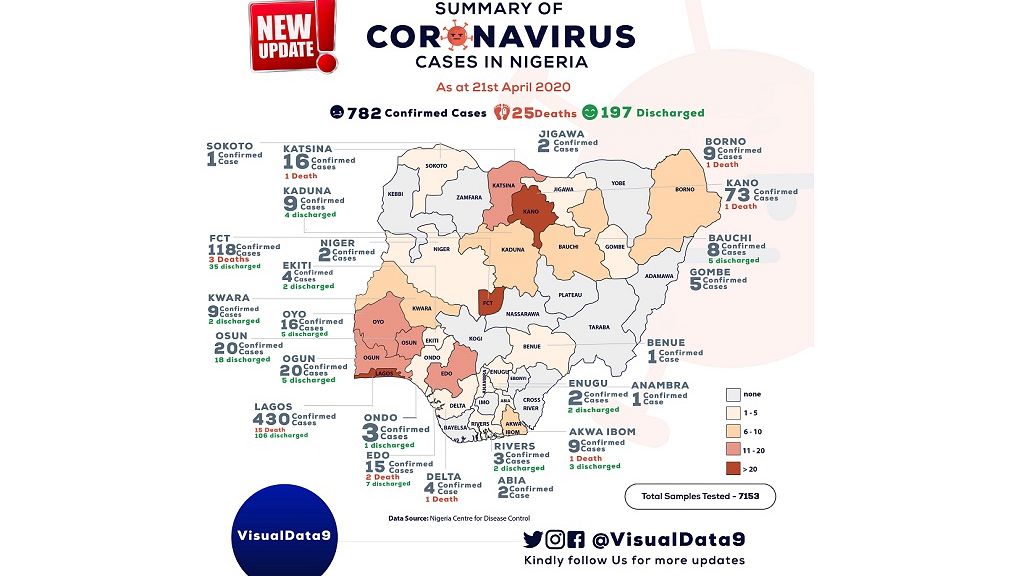 Affairs of the state government had been in the hands of his deputy over the period he was undergoing treatment. He appeared for a video meeting recently after rumours started spreading that he had been transferred to Lagos due to complications.

In neighbouring Kano State which has in five days become the third most impacted state by way of infection, a report that the testing center had been closed due to lack of testing materials raised eyebrows in the country along with a series of mysterious deaths the government is probing.

Special coverage of COVID-19 in Nigeria

President Buhari has meanwhile written to the chief justice asking that certain categories of cases be expedited to allow for decongestion of prisons in the light of the danger congestion presents amid the COVID-19 pandemic.

Kano state thus becomes the new “poster boy” of the virus with a tally that stands at 59 behind FCT’s 89 and Lagos’ 376. The state is currently under lockdown as a measure to curtail spread of the virus, one death has so far been registered.

A media aide to the state governor bemoaned on Twitter how a section of the population continued to flout stay at home regulations. His post in Hausa indicated that the violators included the rich and poor alike.

As at 11:50 pm 19th April there are 627 confirmed cases of COVID-19 reported in Nigeria, the NCDC reported. The figure included eighty-six new cases from the previous figure of 541. The tally of discharged people stood at 170 with deaths at 21.

The new cases included 70 in Lagos, 7 in FCT, 3 in Katsina, 3 in Akwa Ibom, 1 in Jigawa, 1 in Bauchi and 1 in Borno. Jigawa and Borno becoming the latest states to record cases.

Meanwhile, a renowned preacher general overseer of the Redeemed Christian Church of God, says Nigeria will recover from COVID-19 before the rest of the world.

A top aide to Nigerian president has died from COVID-19, the president’s spokesperson confirmed in the early hours of Saturday.

“The Presidency regrets to announce the passage of the Chief of Staff to the President, Mallam Abba Kyari. The deceased had tested positive to the ravaging COVID-19, and had been receiving treatment. But he died on Friday, April 17, 2020,” a statement from spokesman Garba Shehu read in part.

In a test of faith, Christians mark Good...