Toyin Abraham was born Olutoyin Aimakhu on September 5, 1984. Toyin Abraham is a Nigerian film actress, filmmaker, director and producer. She was born on September 5, 1984 in Auchi, a town in Edo State in southern Nigeria, but spent her early life in Ibadan, the capital of Oyo State in southwestern Nigeria. She obtained a Higher National Diploma Certificate in Marketing from Ibadan Polytechnic and was in the same class with Dibie, C.B.N aka x7. Toyin Abraham has starred in many movies and recently starred in a movie called Black Val. 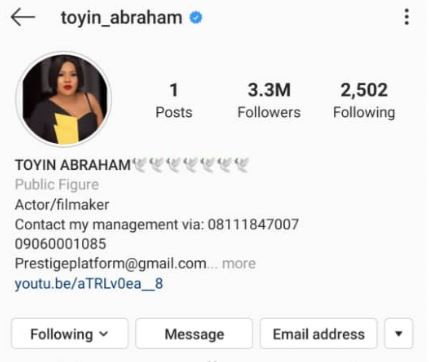 Toyin Abraham began acting in 2003, when Bukky Wright, a Nigerian film actress, visited Ibadan to shoot a movie. Over the years, Toyin Abraham has produced, directed and featured in several Nigerian films, such as Alani Baba Labake and Ebimi ni. She was nominated for Best Supporting Actress in a Yoruba film titled Ebimi ni during the 2013 Best of Nollywood Awards alongside Joke Muyiwa, who was nominated for Best Lead Actress in a Yoruba film titled Ayitale. Based on her acting career, Toyin has also been called upon by politicians to campaign for them. At one of the programs for Nigeria President Goodluck Jonathan’s re-election bid in 2015, the actress said she was prepared to die for the Peoples Democratic Party (PDP) on whose platform Jonathan is contesting. But she later came out to apologize to her fans for the comments and urged Nigerians not to spill their blood for any politician.

She has acted in hundreds of Nigerian movies such as;

On January 1, 2015, there were reports that Toyin Abraham had separated from her actor husband Adeniyi Johnson after one and six months of marriage. A handful of Nigerian tabloids claimed that the Yoruba Nollywood actress and upcoming actor have gone their separate ways with series of allegations of infidelity

Aliko Dangote’s daughter and hubby welcome baby girl in US